The Likert scale: what it is and how to use it

The Likert scale is a widely used tool in survey research to measure opinions and attitudes about a specific topic.

It is a horizontal scale, typically with 5 to 7 points, where the respondent indicates their attitude towards a series of questions or statements known as Likert items.

It also allows for the assignment of numerical values to each answer option, and the calculation of an average score for the responses of all respondents.

The Likert scale is commonly used to measure aspects such as experience with a website, satisfaction with a product or service, or the level of agreement or disagreement about a specific topic.

How to correctly use a Likert scale

To use the Likert scale effectively and obtain reliable and useful data, it is important to be mindful of the following recommendations:

Choose the right number of levels.

5 or 7 levels are typically used for Likert scales, as adding more levels allows for more nuanced answers (this effect tends to disappear after 8 levels).

However, it is known that respondents tend to avoid extreme opinions and concentrate their answers on central values (center tendency bias). A 7-point scale helps to smooth out this bias, providing participants with more options to express their opinion.

The Likert scale has to be symmetric

Regardless of the number of options available, it is important that the scale is symmetrical, that is, that it has the same number of positive or negative answers and that it is not unbalanced on one side.

Within the symmetry, the scales can be bipolar, that is, provide response options that represent two extreme concepts around neutrality (Confused / Clear) or unipolar, that is, have as extremes the absence and the maximum value of something (Nothing of agree / fully agree). The unipolar option tends to be preferred because it is easier for respondents to understand.

The Likert scale has to be balanced.

To ensure that we can correctly measure the opinion of the respondents, it is essential not only that the distance between the different answer options be the same but also that the respondents themselves perceive it as such.

For example, a scale with the following response options would raise questions

Is the difference between “fair” and “good” the same as between “optimal” and “excellent” or between “terrible” and “bad”?

The answer options must be descriptive and precise.

One of the most common mistakes we can make when designing a survey is asking questions or providing answer options that are unclear and that can be understood differently by each respondent.

This is a problem that can also affect our Likert scale, so we have to make sure we are as precise as possible and not give rise to subjective interpretations.

For example, how much is “somewhat in agreement”? Is it more than “fairly agree” or “slightly agree”?

It may or may not have a neutral value.

There are different opinions about whether a Likert scale must have a neutral central value (“indifferent”, “neither agree nor disagree”…) or, on the contrary, only positive or negative values.

Although it is true that respondents may not have a formed opinion on a certain topic, supporters of omitting the core value argue that it is too often used as a wildcard for those who do not want to spend too much time thinking about their response and that the presence of only positive or negative values allows forcing them to express their honest opinion.

You have to mix positive and negative statements.

Another very common bias observed when analyzing survey responses is that participants tend to agree with the statements presented or indicate a positive attitude (acquiescence or consent bias). To mitigate this effect, it is good practice to present Likert scale item statements mixing positive and negative statements.

The SUS questionnaire, used to measure the perceived usability of an interface or product, is designed in this way, asking participants to indicate their agreement or disagreement about statements such as:

“I find this website very uncomfortable to use” Negative

With the same objective of avoiding consent bias, it is advisable to formulate the statements as questions rather than statements (to which the participants usually agree by default).

To what extent are you satisfied with the care received? (From “very dissatisfied” to “very satisfied”)

It is less subject to consent bias than assertion

Items must be grouped consistently

Let’s avoid jumping from one topic to another within the same list of items. In order for respondents to be able to focus on their answers, the items on a Likert scale that are displayed together should deal with different aspects of the same topic.

How to analyze data from a Likert scale

The Likert scale data can be analyzed individually or in aggregate, joining the answers of different items that deal with the same aspect.

To analyze the data, a numerical value is assigned to the response options that reflect their position on the scale (hence the importance that the distances between the options be the same and as objective as possible).

Neither agree nor disagree (Value 3)

The data is then analyzed by adding the values relative to all user responses to each item and dividing by the number of respondents. In this way we will be able to obtain an assessment between the extremes of the scale that represents the average of the opinions of the participants. 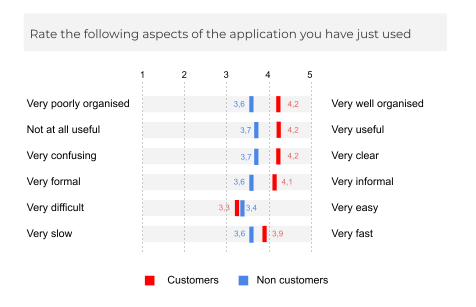 When the items are analyzed in aggregate, it is possible to assign a numerical value to each of them if we consider that they have a different weight when assessing the common theme.

For example, if we wanted to assess the customer service received with a Likert scale with these items…

… and we are convinced that satisfaction with the solution provided is the most important aspect to assess the quality of the service, then we should give greater weight to this item when measuring global customer satisfaction. 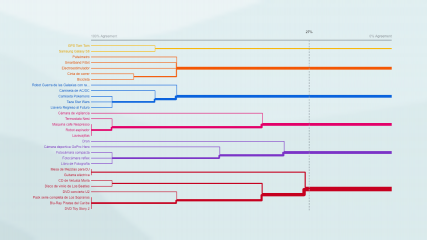 10 Mistakes To Avoid In An Online Survey